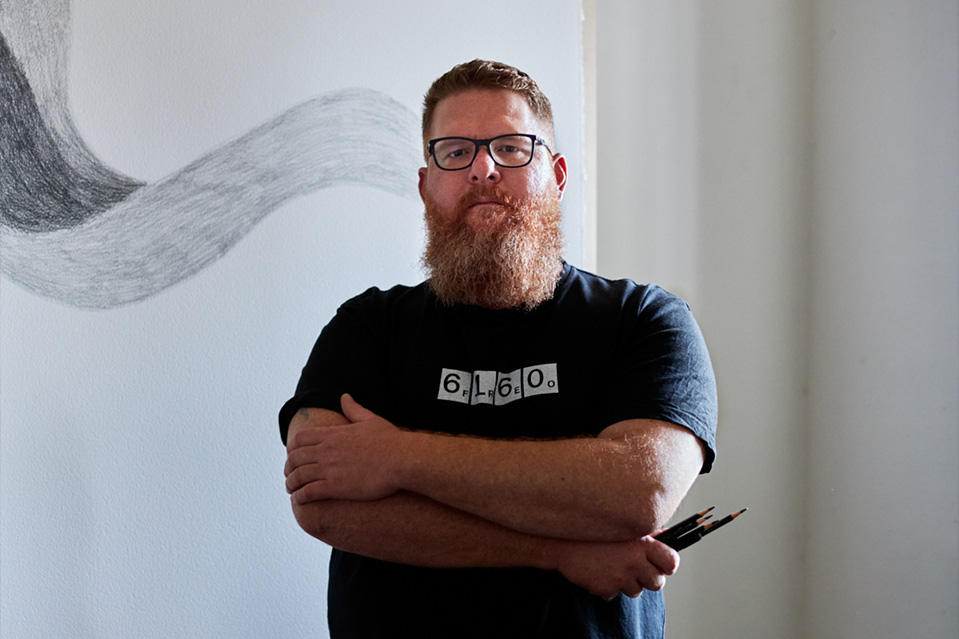 2B or not 2B? (SORRY, NOT SORRY.) No doubt this is a question that plagues the mind of artist Ross Potter.

Ladies and gentlemen, distinguished guests, it is my absolute pleasure to introduce you to the works of Ross Potter. Ross is a graphite artist (fancy way of saying he creates his intricate work with the humble lead pencil), originally based on the East Coast (Brisbane to be exact) he made the move west back in 2007. Growing up in a large family meant it was a fight to get a word in, so drawing fast became a form of communication. Although drawing was a huge passion, a little thing called life soon got in the way. Ross went from spending a lot of time with pencil and paper to spending a lot of time working in kitchens – ultimately ending up in the steel industry where he stayed for a good 12 years. After a trip to Fremantle and encouragement from those around him, Ross decided to repurpose the toolbox to become one of the best pencil storage devices I’ve seen in a while.

It’s no surprise that Ross fell madly in love with Fremantle and the heritage of the buildings, but Ross fell even harder for the old derelict South Fremantle Power Station. The notion of preserving certain buildings, noticing which buildings are well used and which buildings are not so well used, lead to the buildings becoming the subject of Ross’ early work. Each building had its own story to tell of what it once was and will never be again. It’s only fitting that we had this conversation at the Fremantle Art Centre, which just happens to be the old Asylum now repurposed for the artistic community.

Ross’ philosophy is essentially all about observation. If you spend enough time looking at something you will see something different – something that everyone else walking past won’t. Ross was exploring the Boranup Karri Forest where he noticed a tree where people had been carving the word ‘love’ into it. What they thought was a romantic notation was actually detrimental to the tree. The subject matter of his second exhibition ‘Wood’ all came together through a simple gesture from his nephew, “My nephew was about two and grabbed a stick off the footpath and put it in the letter box and pretended it was mailed to me. That just changed everything. To appreciate a stick that everyone just walks past and not even think about. That stick was the main piece at about 6m long to amplify it as much as I could to make up for our adultness.”

Ross’ more recent work involves large scale animal projects, from whales to a life-size drawing of Tricia the Asian elephant. Currently working on a little project (still in its early stages) called ‘Bread and Bone’ and looking to incorporate more emotions into the works, Ross has invited other Perth Based graphite artists to collaborate. With all the artists having small families, they are exploring the treatment of food in our society and how having children influences and challenges that idea. I for one am excited to see how this comes together.

As luck would have it, I managed to catch Ross just before he headed off for an artist residency at Vasse Felix in the beautiful south-west. In hindsight perhaps, I should have postponed and met hit down there, we could have traded coffee for wine and let the good times roll.

With a young family myself, I’m really looking forward to seeing Ross’ current project come to life. Do yourself a favour, get down and see his work in person if you can. It’s nothing short of incredible.

“Pencil and paper for me is like a language, a lot of people say, ‘why don’t you use colour?’, I say, ‘Why don’t you speak French’.”

IF YOU LOVE THESE STORIES … please consider supporting my work for just the cost of a cup of coffee. It will go a long way towards producing more content to share the work of our brilliant Artists.