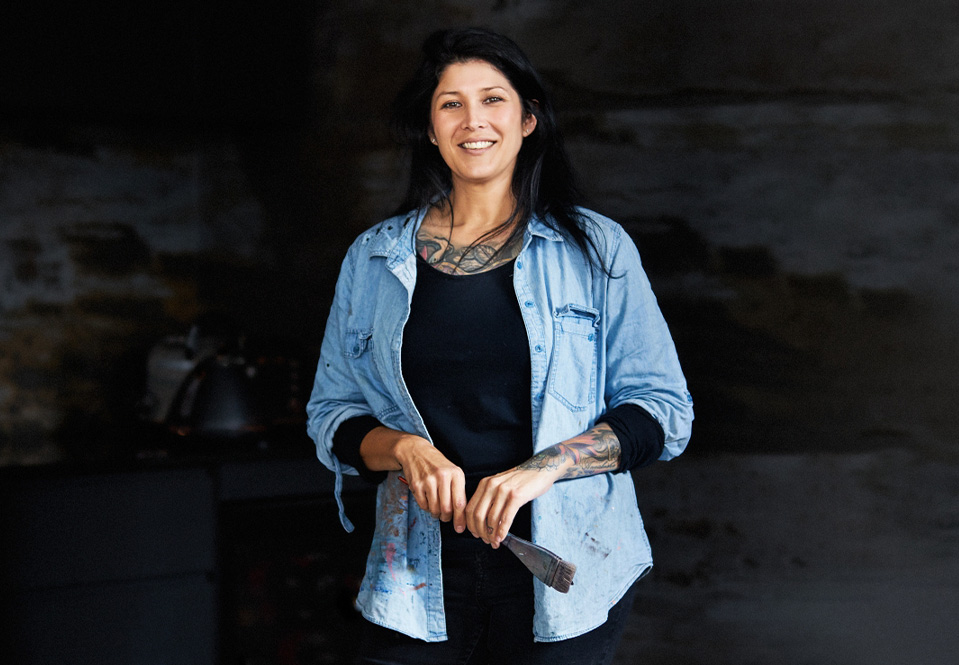 The stark red earth. The swollen boab trees. The picturesque sunsets. The flowing rivers. The prolific wildlife. The majestic gorges. I mean really, if none of that inspires you, are you even living?

Chantelle moved to Broome when she was about nine before moving up to Derby where she spent most of her youth taking in all her surroundings, which are still used as inspiration for her artwork.

“I pretty much stayed at high school because I had the best art teacher, he just let us paint all the time. A lot of my work was inspired by him to start with, with the local landscapes”

Inspiration always plays a big part in these little outings of mine. It is just so fascinating to dive into the mind of such talented artists and to see where their amazing work begins its life. For Chantelle, apart from living in perhaps one of the most visually stunning parts of W.A, her greatest inspiration was a teacher, her art teacher to be specific (I mean no surprises there, right?). His approach to teaching art was more hands on and let’s get it done as opposed to let’s talk and read about it (boring!). To this day Chantelle still looks to her former art teacher for inspiration – not long ago they caught up and painted the day away.

As a tattoo artist, Chantelle’s creative mind was moulded with the ability to jump from creating a tribal piece, to an aeroplane, to skulls and daggers, to pretty much what ever the customers wanted inked. After spending some time in her space, I could see she approaches her own art in the same manner – jumping between various projects. I think this contributes to being unable to pigeonhole her to a certain genre. Her animal paints (the famous emus!) and Kimberly influenced landscapes are perhaps some of her more well know works. How ever it doesn’t just stop there, Chantelle creates anything from pet portraits, human portraits to voodoo queens and cars. Although admittedly she said that the car piece has taken her the longest as she needs to ‘feel’ the work and the car just hasn’t been doing it for her. Having just discovered Pinterest and created a sea of boards of inspiration, she feels  she doesn’t have enough time to get it all done.

“I did a couple of these already and a lady bought one, but said she wanted to buy the second one and a third one for her long hallway, she wanted this one to have the marsh and the birds with the boabs”

Chantelle is currently working through a stack of commissioned pieces, and in between she is working on whatever jumps into her mind while rocking out to some tunes, drinking coffee and ultimately living any artists dream.

P.S I cant believe that I haven’t mentioned Trevor until now. Trevor is Chantelle’s pet snake who provides some beautiful snake skins when it’s time to shred! You can see some of Trevor’s finest work here on the Voodoo Queens face (yeah ok Chantelle’s too).

IF YOU LOVE THESE STORIES … please consider supporting my work for just the cost of a cup of coffee. It will go a long way towards producing more content to share the work of our brilliant Artists.